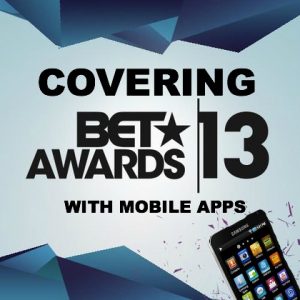 When it comes to covering live events as a blogger I’ve got some years of experience. From the media rooms of BET, Grammys, MTV Music & Movie Awards, and SAG Awards to the red carpets of the Oscars, NAACP Image Awards, movie premieres and celebrity parties,  trust me when I say, I’ve been there, done that!  And with traditional media covering the BET Awards live and occupying coveted red carpet space, entertainment bloggers too need to be thinking what tools they’ll need to cover the big show.

When I began blogging it was all about the camera, HD prosumer equipment that enabled you to shoot like a real professional, ENG or EFP style.  For you new schoolers that means Electronic News Gather or Electronic Field Production. Wow, that degree still comes in handy!

But with technology always changing, cumbersome HD cameras and expensive DSLR kits aren’t you’re only options anymore.  Got iPhone or Android smartphone? Then you’re almost ready to hit the red carpet with the big boys and their big recording toys because size doesn’t matter in this case. As a blogger, smaller is often better.

Mobile apps make the smartphone world go round.  As an entertainment blogger in this digital age they can make your job a lot easier. In many cases, smartphone apps can even replace your computer when it comes to posting directly to your site and social profiles on the go!  And trust me again when I say you’ll definitely will be on the go covering the BET Awards live.

From the show’s pre-events to the red carpet to the media rooms and all places in between, during the BET Awards you’ll need to be prepared to record, document, and publish quickly.  As the shows tagline/hashtag states #AnythingCanHappen  and you won’t always be able to get to your computer or tablet.  So here’s 10 mobile apps that I’ve used or researched that will help you cover any major showbiz event like a social media pro.

Download the official BET Awards app now. Get familiar with the information there so you can stay abreast of official BET Awards updates.  And it goes with out saying–but I’m going to do it anyway–you’ll also need Facebook, Twitter, and Instagram mobile apps so you can follow the show’s posts to their social profiles.  Those I’m not adding to the list because as a real entertainment blogger, you’re expected to have them.

Cover It Live or ScribbleLive:  For live blogging I found these two mobile apps to work great while covering the SAG and Oscars!  There’s free and paid versions.  With the mobile apps I posted pics, audio, videos, and text right to my own blog with these tools.  And those updates were forwarded to my Twitter and Facebook fan page accounts.

Each of these has slightly different advantages and interfaces. Both allow you to also curate content, so during the down time when you’re not creating your own, you can still supply  great visuals, tweets, etc. to your audience.

3. Ustream And Livestream (Qik):  Want to report LIVE like the big boys do sans the live truck and heavy cables you always trip over? With the Ustream and Livestream mobile apps you can do just that!  BUT bare in mind you’ll need a strong internet signal and plenty of battery power.  Depending on your access to power, data plan, and internet capabilities you could stream intermittently or maybe even continuously.

Keep in mind, however, that Livestream partners with Qik to do livestreaming via mobile. So be prepared to set that up.  Ustream’s mobile app is a stand alone and allows for chatting, so you can respond to questions from viewers faster.

Got a YouTube channel in good standing with 1,000 or more subscribers so I’m told, then livestream right to your YouTube Audience. Click HERE to set it up.

Then last but definitely not least, in FACT it’s my FAVE.  Socialcam! It’s great for capturing video via mobile.  It’s not a livestreaming app but it’s the next best thing.  And unlike all the hoopla around Instagrams new 15 second video option and Vine’s mere six, SocialCam has NO TIME LIMIT!  And even more special, it’s got creative filters, graphics, music, and a thriving community of viewers.

I’m not a podcaster, however, I’ve used my smartphone’s voice recorder to do audio interviews. But that may not be enough if quick turn around is required.  For you that have podcasts and online radio shows here some options for your BET Awards Experience coverage.  On iPhones there’s Garageband for iTunes and Mobile Podcaster for you posting to WordPress sites. These apps aren’t free, but no more than $5.oo.  Think tax write-off!  Android users try Spreaker.